Home Travel Tales Learn How to Snowboard at Snow Summit This ski season has been pretty epic here in California.  Coming out of a multi-year drought, the massive amounts of rain and snow were quite unexpected.  With the mountains open for business, it was time to get Timmy more snowboard lessons.  Since we live in Orange County, we can do a quick weekend getaway to learn how to snowboard at Snow Summit.

Snow Summit Ski Resort is the best place to learn how to snowboard in Southern California.  It takes about 90 minutes from Orange County to drive.  And, best of all, your daily lift ticket is good at both Snow Summit Ski Resort and Bear Mountain, so you get to explore two mountains for the price of one!

Combined, Snow Summit and Bear Mountain have 26 lifts, 436 acres of developed terrain, and world class terrain parks.  No matter your skill level, you’ll find something to ski or board.

In case of bad weather, which is rare in SoCal, there are actually two roads that lead up to Big Bear.  It’s great to have options when a road may be closed due to snow or an accident.

Learn How to Snowboard at Snow Summit

Timmy and I flew up to Mammoth in January so he could learn how to snowboard.  He had two lessons there and really enjoyed himself.  And, the lessons served as babysitting so I could enjoy the mountain on runs that were far above his skill level.

When we were done in Mammoth, I knew that Timmy needed more lessons, but I didn’t want to spend the cash (or miles) to fly or take 5-6 hours to drive to Mammoth.  Instead, we booked a long weekend in Big Bear at the local mountains so that Timmy could continue to learn how to snowboard without the added expense of travel.

Click here for information and pricing if you’d like to book lessons for your child to learn how to snowboard at Snow Summit.  The rates vary by age and duration of the lesson.

Getting Ready to Learn How to Snowboard

After reserving Timmy’s full-day learn how to snowboard lessons online, we arrived at Snow Summit early the next morning to wait in line to complete our paperwork.  The line seemed long, but it went pretty quickly.  At the front, the staff asked us a few questions to assign Timmy to the best group for him to learn how to snowboard. Next, we moved into the sizing room, where they fitted Timmy for boots and bindings.  I learned my lesson this time and actually remembered to bring his helmet.  I bought him a unique wood-grained design so that it would 1) be easier to find him in a crowd and 2) look good enough that he will want to continue to wear it as he gets older and safety is no longer “cool.”  Check out the Traverse helmet I bought him from Amazon. By next season, Timmy will have his own board and boots so we won’t have to rent them any longer.  Not sure if I will buy used from a place like Play It Again Sports or buy him something new.  Most likely will buy used since he will grow out of them quickly.

After getting all of his gear, it was time to say “Goodbye” as he joined his new friends in the waiting area for their instructor of the day to arrive. Normally, I would have left them be, but I wanted to get some photos and video for this post (and to share with Anna since she was back at the resort with Scarlett).  So, I waited outside and followed them to the learn how to snowboard lessons.

Learn How to Snowboard at Snow Summit – Day 1

Because Timmy had a couple snowboard lessons at Mammoth, he was grouped with the more advanced kids.  After a quick orientation by their instructor, it was time to catch a ride on the magic carpet.  This way the instructor could assess the kids and determine who needed what focused on while they learn how to snowboard. I’m glad that Timmy remembered so of his previous lessons, so he did better than many of the other kids.  He had a solid base to work from and continue to learn how to snowboard at Snow Summit.  The class sizes were larger at Snow Summit (8-10 kids) than they were at Mammoth Mountain (4-6 kids), so he didn’t get as much personalized attention here.  We were at Snow Summit during the President’s Day long weekend, so that may have been why the groups were larger.

Throughout the day, Timmy continued to get better.  With each session, you can see his confidence and abilities continue to grow.  Talk about being a proud Dad! After the first day of lessons, Timmy was happy and excited to continue to learn how to snowboard.  We had lessons booked for Day 2, so Timmy could learn while I rode the mountain with friends. Learn How to Snowboard at Snow Summit – Day 2

After a good night’s sleep, we were ready to continue to learn how to snowboard at Snow Summit.  We learned our lesson about parking at Snow Summit, so we arrived extra early to avoid the crowds and get a prime parking space at the closest parking lot.  We were actually the first guests at the lot!  There are big transport trucks that remind me of something they would transport cattle from one ranch to another. 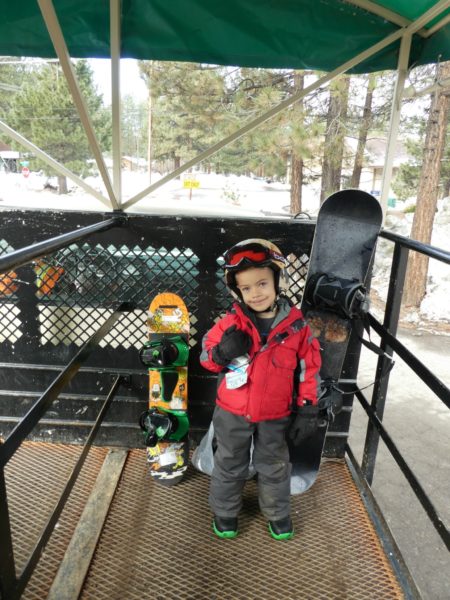 We were back on the slopes in no time.  And the first run of Day 2 was even better than yesterday!

About halfway through the day, the kids took a break for a kid-friendly lunch of corndogs, tater tots, apple slices, and apple juice. On the other hand, I had one of the most delicious mountain lunches ever.  I stopped by the Bighorn Smokehouse and couldn’t decide what to eat.  So, I ordered two meals – the smoked brisket and pulled pork, both with a side of mac’n’cheese.  It was soooooo good.  And I was stuffed. After lunch, I joined the group so that they could have an extra adult to help the kids get on the lifts and get more much-needed experience getting on and off the lifts. By the end of Day 2 of Timmy’s lessons to learn how to snowboard, he was doing so well.

Unfortunately, he was also getting tired and a bit grumpy. After this run, I had to walk him down the rest of the slope. In the future, I would try to schedule a rest day in between lessons so that he can rest up a bit. No matter how much Natalie (the Day 2 instructor) and I tried to get Timmy to smile, he was wore out and ready for a snooze.

One of the best things about taking lessons to learn how to snowboard at Snow Summit (or any of the sister mountains) is that you get a free season pass after 4 lessons.  The season pass is good for the rest of the season, so make sure that you schedule your lessons early in the snow season to take full advantage of this valuable perk! After we completed our 2nd day of lessons at Snow Summit, Timmy now had his season pass.  It is good at Snow Summit, Bear Mountain, Mammoth Mountain, and June Mountain.  Although the ski season usually ends in April in the SoCal mountains of Snow Summit and Bear, Mammoth and June are usually open through July 4th if there’s good snowfall.

If you’re looking for a local mountain to learn how to snowboard (for the kids or yourself), you should consider booking a trip to Snow Summit.  Timmy had a great time with new friends and the instructors, and I had some time to myself to board the more difficult runs.  If I had paid someone to babysit him for the day, that might have cost just as much as the lessons!  I’m super proud of Timmy and how well he has learned how to snowboard.  It will be fun snowboarding with him the rest of the season to utilize the season pass that he earned.

Have you booked any lessons to for your kids to learn how to snowboard?  What was your experience like?  Did they like it?  Will you do it again?