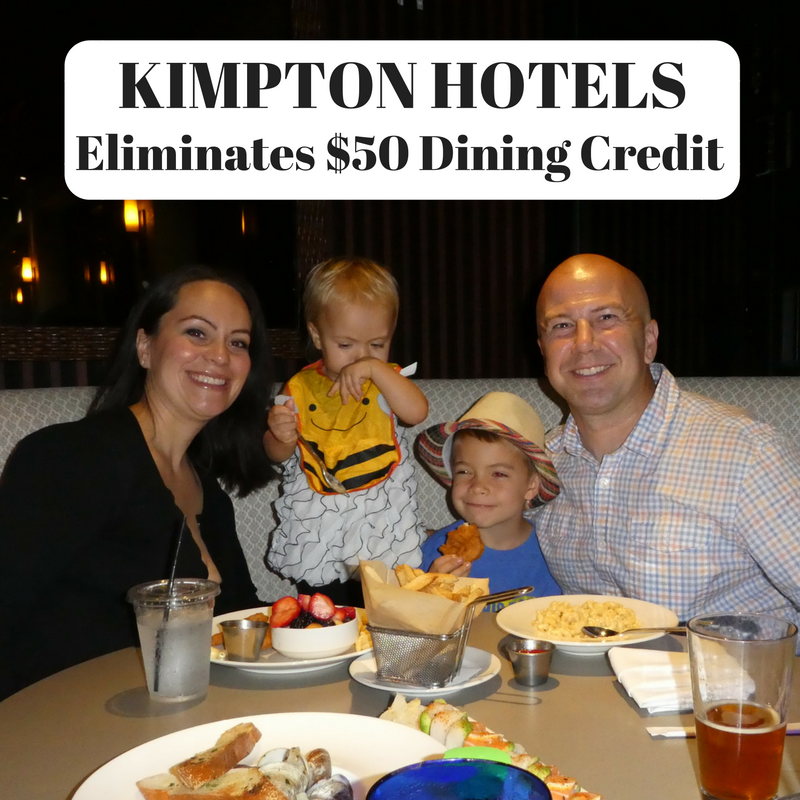 Kimpton does a ton to spoil their best guests, so I was surprised to read a recent email detailing upcoming changes to the Kimpton Karma Rewards program for 2017.  So far, not much has changed since IHG acquired Kimpton a couple of years ago.  2017 is the first year that the rewards program has changed as Kimpton eliminates Inner Circle dining credit.

For those who don’t know, Kimpton Inner Circle members get a free night shortly after a new property opens.  And during your free stay, you also have a $50 dining credit to use at the on-site property.  It was an awesome benefit because the on-site restaurants at Kimpton hotels have some of the best chefs in the country.

In an email dated December 22, 2016, Kimpton sent out an email to Kimpton Karma members detailing changes to the program for 2017.  The fifth bullet says it all… or does it?

“Due to limited usage, were retiring the Inner Circle $50 restaurant credit at new restaurants.”

I waited to get clarification that Kimpton eliminates Inner Circle dining credit on existing reservations until I was at the Journeyman.  Scarlett and I braved the cold and flew out to Milwaukee for a Daddy-Daughter vacation.  I’m pairing the free Kimpton Journeyman Inner Circle night with a paid Double Credit stay for a fun weekend.  I was really looking forward to spoiling Scarlett (and myself) to a nice dinner at Tre Rivoli during my stay!

Kimpton has an awesome social media team that quickly replies to comments and questions, so I reached out via Twitter to find out if this was for all reservations or only those booked in 2017.  I didn’t like the answer. <<frowny face>>

@BaldThoughts Unfortunately, we’ve retired the dining credit at all new restaurants because it was being underused, Lee.

I had hoped that existing reservations made before the notice would be grandfathered under the old rules, but those hopes were dashed.

The wording is a bit odd that “limited use” would be the reason why you discontinue a benefit.  For example, I’ve never used the spa benefit, but that benefit remains.  Even though we’re spoiled with the excellent benefits in the Kimpton Karma program, it still stings to lose out on a great benefit.  I’ve used it every chance I had.  What’s done is done.  I still love Kimpton way more than the other loyalty programs.  Kimpton is literally the only program I spend cash at.  So let’s focus on the positives, like all the free nights we’re eligible for at the new properties added to the Kimpton portfolio… and all of the others in the pipeline!  Hello, Amsterdam, Paris, and Granada!