In the summer of 2016, I found a mistake fare to Stockholm, Sweden for around $250 a person.  Scandinavia has always been on my list of places to visit, so I booked tickets for Timmy and me to go.  After researching all of the hotel options, I settled on the Hilton Stockholm Slussen.  They offer a convenient location, the rooms were reasonable price in points, and I figured I would get upgraded and benefits due to my Hilton HHonors Diamond status.  Here’s my hotel review of our stay in an upgraded Executive King room.

I waited several months to book our hotel.  Even though Stockholm is a popular city, there really aren’t that many US-branded hotels to choose from to redeem points for a stay.  I have a bunch of Club Carlson points, but couldn’t justify paying 44k-70k points per night when some of their properties could be had for less than $100 a night.  I decided to save those points for other stays where there a better redemption value.

Instead, I chose to go with Hilton because I have way more points with them, the rooms were more affordable, and I knew that my Hilton HHonors Diamond status would provide free breakfast and a better chance of an upgrade.  I booked 4 nights in a Twin Deluxe room at the Hilton Stockholm Slussen (the only Hilton property in Stockholm) for a total of 143, 628 points (or 35,907 points per night).

It could be argued that spending those points wasn’t worth the $450 it would have cost for 4 nights at this Hilton.  And you’re right, I could have stayed 2 nights at some very nice Hiltons for 140k points.  However, I’m a big fan of using miles and points whenever reasonable.  Since I already paid $500 for our flights, I wanted to conserve my cash. When we checked in, we received an upgrade to a King Executive room.  This upgrade saved me over 50,000 Hilton HHonors points, or if I was paying cash, $160. Check rates & book now at Booking.com | Expedia | Hotels.com | Priceline | Travelocity.  Loyalty benefits may not be available unless you book direct.  For the latest reviews from travelers like yourself, check TripAdvisor.

The Hilton Stockholm Slussen is located at 8 Guldgrand, Stockholm Sweden on the island of Sodermalm.  The property overlooks the water and bridges that connect it to the “old town” of Gamla Stan.  A short walk in either direction connects you to Stockholm’s efficient and affordable subway/rail system.

Timmy and I often walked to some of the local tourist destinations, such as the Nobel Museum, the Royal Palace, and the boat tour.  When we wanted to visit other locations, a 2-3 minute walk to the metro stop got us to where we wanted to be in a hurry.

The hotel was split among 3 different buildings, each connected via an underground walkway.  I believe the tallest building was only 5 or 6 stories tall.

Because of my Diamond status, aside from the upgrade to an Executive King room, I was also presented with some additional gifts.  First, I was informed that our daily breakfast buffet would be complimentary.  Next, I received two drink tickets that I could redeem at the lobby bar/restaurant, Eken.

Cannelle at the front desk was extraordinarily nice and made us feel very welcome.  She also presented us with some local snacks and a coloring book for Timmy to enjoy.  We had plenty of questions, and she answered them all without us feeling rushed. While we were out exploring on our first full day in Stockholm, the hotel brought us a basket of fruit to help us celebrate Timmy’s birthday.  Such a nice, unexpected gesture! We were delighted to hear that we were upgraded to an Executive King room when checking in.  Our room was on the 3rd floor of the 4 story building.  It was directly beneath the Executive Lounge.The room is slightly larger than the original room I booked, but the real upgrade was

The room is slightly larger than the original room I booked, but the real upgrade was an amazing view from our little balcony!  Our room was a corner room that overlooked the light-rail, water, and the “old town” of Gamla Stan. Timmy enjoyed the view from our balcony as well.  However, the temperatures were below freezing (high of about 30* F while we were in Stockholm), so we didn’t spend much time on the balcony.  Actually, since we didn’t have a fridge to use, we left drinks out on the balcony so they’d get cold. In our room there was a living room area with a pull-out couch, coffee table, a small circular desk, and a flat-panel TV on the wall.  The TV was visible from the bed, but you need to angle it towards the bed.  There is a fridge in the room as well, but it’s one of those nasty ones where if you move anything in the fridge, you automatically get charged for the item.  I HATE those fridges. The bed was really comfortable, but European beds take a little getting used for us Americans.  If you look closely, you will see that there is no top sheet on the bed, only the fitted sheet.  Instead, each person gets their own comforter.  The spacing was a little off in the room with the corner of the closet sticking out close to the bed.  I almost bumped into it plenty of times while headed to the bathroom. The bathroom was bigger than normal for a European hotel.  Because it is so cold in Sweden during the winter, the marble floor was heated and the towel racks were heated as well.  There was a little too much marble in the bathroom for my taste, but overall it was nice.  The floating sink was unique with its stacked circles.  The bathtub/shower combination had both a fixed shower head and a wand that you could use to focus the water on specific areas of your body.  These wand shower heads are also great with kids that don’t like normal showers that spray everywhere. Overall, the room was nice.  The one thing it was lacking was a way to control the temperature.  When the window coverings and bathroom door were closed, the room became warmer.  But, as soon as we opened the curtains, you could feel a chill in the air.

Because I am a Hilton HHonors Diamond member, we had complimentary access to the Executive Lounge on the 4th floor of the main building.  In the evening from 6pm to 8:30pm there were free drinks and light snack to enjoy.  We enjoyed cheese, crackers, chips, brownies, french fries, and assorted pastries.  Orange, apples, and a couple other juices were there for kids.  Several types of soda were available in the mini-fridges.  While local beers, ciders, wine, champage, and hard alcohol were options for adults. The seating area was fairly large and the prime spot was next to the fireplace.  A couple of TVs were on showing international news and sports. In the mornings, the Hilton Stockholm Slussen Executive Lounge offered a small breakfast.  Timmy grabbed some bacon, but we headed downstairs to enjoy the full breakfast instead. As a Hilton HHonors Diamond member, the buffet breakfast each morning was complimentary.  During the weekends, the buffet was open from 7am to 11am.  On weekdays, the buffet was available from 6:30am to 10am.  We took full advantage of the buffet each day.  It really filled us up ahead of our daily adventures.  Some days, we only had two meals because we were so full from breakfast. There were plenty of options to choose from at the buffet.  Each type of food was in a distinct area.  A water and juice offered several types of juice, fresh fruits, and both sparkling and still water.

A gourmet bread table provided many pastries to choose from. Another table offered European breakfast options of cold cuts and some sort of paste for breads.

A table with heated trays offered baked beans, sausages, bacon, and several other options.  Timmy really enjoyed the waffle station.  Ok, I did too. Who wouldn’t love a waffle with the Hilton logo baked right in? For the most part, the servers were there to seat you at your table, bring coffee, and take away used plates.  However, you had the option of ordering french toast, omeletes, or poached or fried eggs through the servers.  I didn’t like the runny scrambled eggs offered at the buffet table, so I ordered some through the waiter.  They were ok… not like you’d find in the US.

We also tried the french toast, which were completely covered in brown sugar.  They were just OK.  Not good enough, in my opinion, to order more than once.  We preferred the self-service waffles much better. After having so many delicious breakfast buffets, we should have hit the gym.  The gym was large, with many options of machines and free weights.  In the men’s and women’s locker rooms, gender specific saunas were also available.  I had intentions to hit the gym while in Stockholm, but after walking 7 miles a day in the cold, I was too tired to hit the gym. On our final night in Stockholm, we ate at Eken.  It is the restaurant and bar located at the lobby level of the hotel.  I wanted to use the free drink coupons that were offered at check-in. I figured that would help offset the inflated prices on their menu.  I had a couple of local beers ($9 each, but free with coupon) and a burger that was about $20.  The burger and fries were really tasty, but not worth $20.  Factoring in the complimentary drinks, the value was closer to $10-$12. We really enjoyed our stay at the Hilton Stockholm Slussen while in Stockholm, Sweden.  It had a convenient location and the staff treated us well.  The next time we visit Stockholm, this hotel will definitely be at the top of our list. 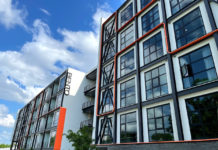